He indicated that plans are far advanced for the commencement of the project, in fulfillment of the ruling government's promises to the people of Ghana.

He indicated that the provision of such facility is very core to tackling the issue of sanitation.

The Deputy Minister further asserted that, sanitation is a national security issue, since it goes to the core survival of mankind.

He iterated that, sanitation is of global importance, such that the advanced countries have chosen to devote a handful of their budget revenue to sanitation. 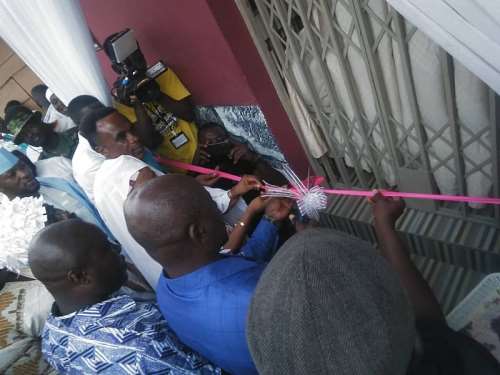 He added that, the initiative is part of government's commitment to achieving the Sustainable Development Goals (SDG) 6.

Goal 6 of the United Nation's SDG states, “to Ensure availability and sustainable management of water and sanitation for all”, with the goal ofhaving eight targets to be achieved by at least 2030.

Meanwhile inspired by the visit of the Vice President to Agbobloshie and the NPP's promise to provide shelter for Head Porters and Traders, Zachariah Cobbina, a multi businessman who owns Zaakmus Enterprise has built an ultra-modern state-of-the-art shelter for the Agbobloshie community.

The completed project, which is estimated to have cost about Ghc500,000.00 has over sixty (60) bed facility, 50 unit toilet, bath and urinal facilities, dressing rooms, changing rooms and other facilities for user comfort.

Zachariah on his part was grateful to the President and Major Oduro for their part in ending the land guard issue that resulted in he getting access to his land at Kasoa.He promised to replicate same project in Ashaiman and other parts of the country.

One Dead, 2 Injured In Galamsey Pit Explosion In Northern Region