At an inquiry hearing, he said HSBC, Standard Chartered and India's Bank of Baroda were "directly culpable".

The inquiry is investigating claims of graft against Mr Zuma and the Gupta family. They deny any wrongdoing.

HSBC said it supported the inquiry while Standard Chartered said there was no evidence linking it to the Guptas.

No-one from the Bank of Baroda was immediately available for comment.

Speaking in Johannesburg, Lord Hain alleged that the banks were helping the Guptas to hide the source of their illicit gains through a network of banks accounts and shell companies.

"They're all up to their neck in this," said Lord Hain, a former anti-apartheid activist. "They continued because of course the corporates concerned, including the banks, were making money out of it." 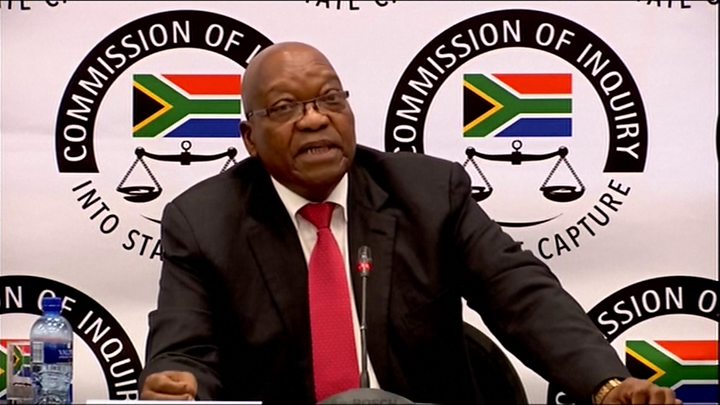 Media captionJacob Zuma: I have been vilified

He blasted the companies for not applying the same "stringent measures" to all customers, and called for more co-operation between corporations and national governments to help recover any stolen money.

Lord Hain's remarks are the latest to be given to the corruption inquiry, which was launched last year.

Mr Zuma resigned as president in February 2018 after numerous allegations of corruption during his nine-year administration.

Several allegations focus on his relationship with the Gupta family, who have been accused of influencing cabinet appointments and winning lucrative state tenders through bribery. They also employed members of Mr Zuma's family.

The scandal is widely referred to as "state capture" - shorthand for a form of corruption in which businesses and politicians commandeer state assets to advance their own interests.

South African authorities raided the Guptas' family compound last year, and the family have been blacklisted by several South African banks and the US Treasury.

Mr Zuma has agreed to co-operate with the public inquiry, but has dismissed it as prejudiced.