Construction works on the 88 kilometre Hohoe-Jasikan to Dodo Pepesu stretch of the Eastern Corridor Road has commenced.

Accompanied by the Minister for Roads and Highways. Hon Kwesi Amoako Atta and the traditional rulers of Oti Region the Vice President, Dr Mahamudu Bawumia on Tuesday, 19th November, cut sod at Jasikan for works to begin on the stretch of road which has a long and painful history of neglect under the erstwhile government.

The Vice President noted that of all the critical roads listed in the 2020 budget, Hohoe-Jasikan and Jasikan-Dodo Pepesu are the only roads to commence. Indeed, contractors for these projects mobilized to site two weeks before Finance Minister Ken Ofori-Atta presented the 2020 Budget statement in Parliament. Dr Bawumia also noted that at the time these projects were initiated, both roads were part of the Volta region.

The Eastern Corridor Roads project, allotted as N2 of the National Road Network, begins from the Tema Motorway through to the Volta, Oti, Northern, North East and Upper East regions to neighbouring Burkina Faso.

Dr Bawumia assured residents of Oti Region that government would ensure the project is completed on schedule, and they would receive their fair share of development projects as all regions shall be receiving.

Vice President Bawumia reiterated the government's plan for fixing critical roads in the country. According to him, sods will be cut for the Cape Coast inner city roads and Nyinahini area roads this week under the Infrastructure for Bauxite facility. The rest of other approved lots are expected to be undertaken soon.

Vice President Bawumia announced many other projects to be undertaken by Government in the Oti region.

“The commitment of government to the development of the Trunk Road Network is evidenced by the many Road and Bridge Development Projects as well as the numerous road maintenance projects that are on-going all over the country and to continue in the year of Roads in 2020.

“Under the Critical Roads Programme for Highway construction, Oti Region will have the Dambai Towns Roads, Nkonya-Wurapong-Kwamikrom Road and the Jasikan-Worawora Road.”

"Government is on course to fix all critical road projects in a holistic approach so that every part of the country has durable roads” he stated.

On his part, Roads and Highways Minister Hon. Kwesi Amoako-Atta assured the people of Oti region of the Akufo-Addo government’s commitment to make a significant dent in the road infrastructure deficit, with their region featuring prominently.

Mr. Amoako-Atta also assured the people of Oti region, particularly the youth, of government’s resolve to ensure that the local content clauses in the agreement with Sinohydro are strictly adhered to in order to create jobs and incomes for indigenes. According to him, the project will provide many jobs to contractors, artisans, cooks, and others with varied professional skills.

On behalf of the Oti region, Nana Aburam Akpandza V, Paramount Chief of Buem and Chairman of Buem Traditional Council, who chaired the sod cutting ceremony, expressed satisfaction at the show of concern by government towards the development of their roads.

Present at the sod-cutting ceremony were Hon. Kwesi Owusu Yeboah (Oti Regional Minister), Mr. Zhang Nianmu (President of Powerchina West Africa and Central Africa of which Sinohydro is a subsidiary), representatives of Embassy of China, Hon. Michael Yao Jato (MP for Krachi East and Deputy Minister for Sanitation), and dozens of chiefs from the Oti region. 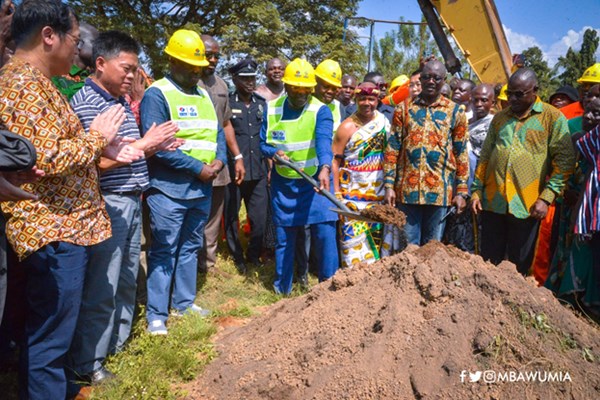 I Will Exempt Small Businesses From Taxes; Commercial Vehicles...

Minority walks out of Parliament over lack of quorum