US Sen. Dianne Feinstein speaks at an election night event in San Francisco

California Democrats voted down an amendment to their party platform that called for the right of return for Palestinians and eliminated references to the two-state solution.

The amendment presented Sunday at the state party’s fall convention also advocated for the return of the descendants of Jewish refugees in Israel to the countries from which they fled.

The Democrats for Israel Los Angeles chapter said in a statement that it coordinated the efforts to defeat the “highly flawed anti-Israel” amendment.

About 65 percent of the 2,500 delegates at the California Democratic Party State Central Committee had rejected the amendment language in the Israel section of the platform. 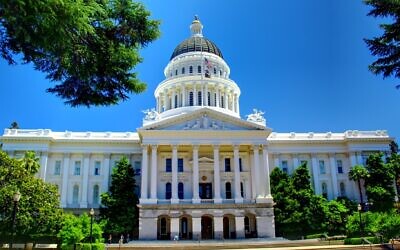 The California state capitol in Sacramento

The party adopted language calling for a two-state solution to the Israeli-Palestinian conflict “directly negotiated by the parties that guarantees equality, security and democracy for all; recognizing Israel’s future as a secure and democratic Jewish state with recognized borders; and providing Palestinians with independence, sovereignty, and dignity.”

The platform also recognizes Jerusalem as Israel’s capital, adding that the “decision to relocate the US Embassy to Jerusalem should not remove Jerusalem from final status negotiations, nor should the capital city be used to undermine the peace process.”

It also continues to denounce the Boycott, Divestment and Sanctions campaign against Israel.