After a sleepless night on Tuesday, a Chinese University of Hong Kong professor was heartbroken and worried that the campus might be used by rioters who intended to cause violence and mayhem.

Some mainland and international students, scared by the violence and a likely worse scenario, began to flee the campus.

Behind a cloud of thick black smoke billowing from a burned trolley crammed with debris, black-clad masked protesters occupying the No. 2 Bridge, the eastern access to the Chinese University of Hong Kong (CUHK), stared down at passers-by.

Shielded themselves with opened umbrellas, they shouted obscenities and threw solid objects at police vehicles, as they occasionally passed by.

The East Rail line, with the CUHK as one of its stations, was halted entirely, and highways near the university were shut down. The University metro station remained shut because of vandalism and damage from fire, so did a couple of shops nearby. The sound of a fire alarm echoed through the station. 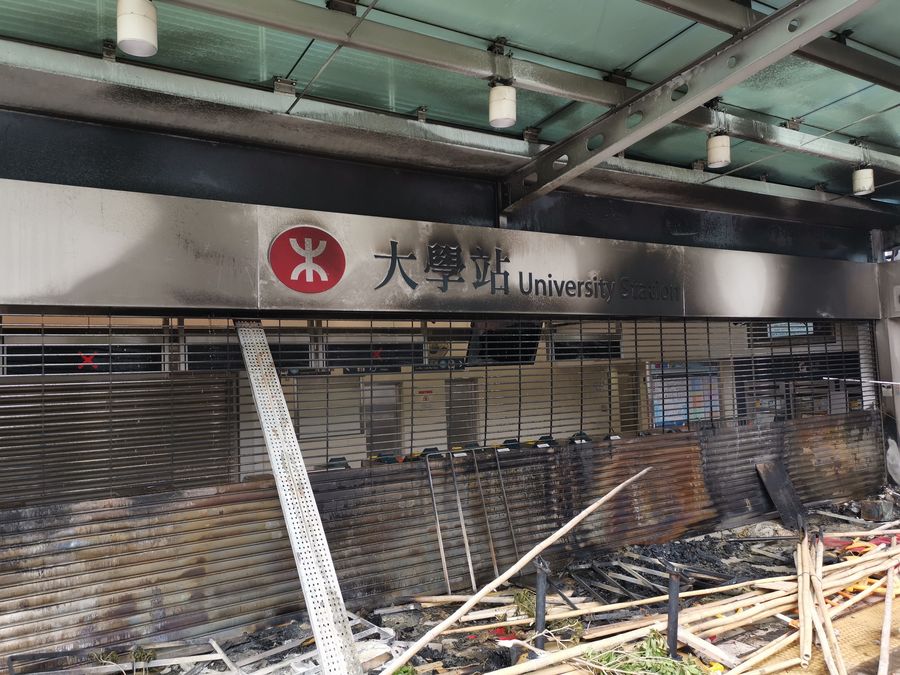 The University metro station is shut down due to vandalism in south China's Hong Kong on Nov. 13, 2019. (Xinhua)

A member of the CUHK staff who declined to be named said the campus was so chaotic that he would not be able to go to work in the coming days. "I just cannot believe what they did. Attacking police and destroying transportation facilities? This behavior is just insane," he said.

A woman surnamed Chow who came back from Canada to visit relatives has been stuck in a hotel adjacent to the metro station along with her husband for days. "I could never have expected what has happened to the university," she said.

As frequent visitors to the CUHK for its beautiful scenery, the couple who had settled down in Canada years ago said they were deeply upset to read news about the vandalism in Hong Kong and people being beaten up simply because of expressing different views.

Masked rioters started to wreak havoc on the CUHK campus in Sha Tin in the New Territories from Monday. They occupied and kept dropping objects from the No. 2 bridge over Tolo Highway, an expressway usually with fast moving vehicles. To protect public safety, police were deployed to guard the bridge.

Since Tuesday afternoon, the rioters repeatedly charged the police and escalated violence by hurling petrol bombs, bricks and hard objects at police officers. Apart from building barricades on campus, they also poured flammable liquid onto cars and set them on fire.

The rioters also shot burning arrows and even fired signal flares. Offensive weapons like electric saws and bows and arrows were used by rioters to target police officers. 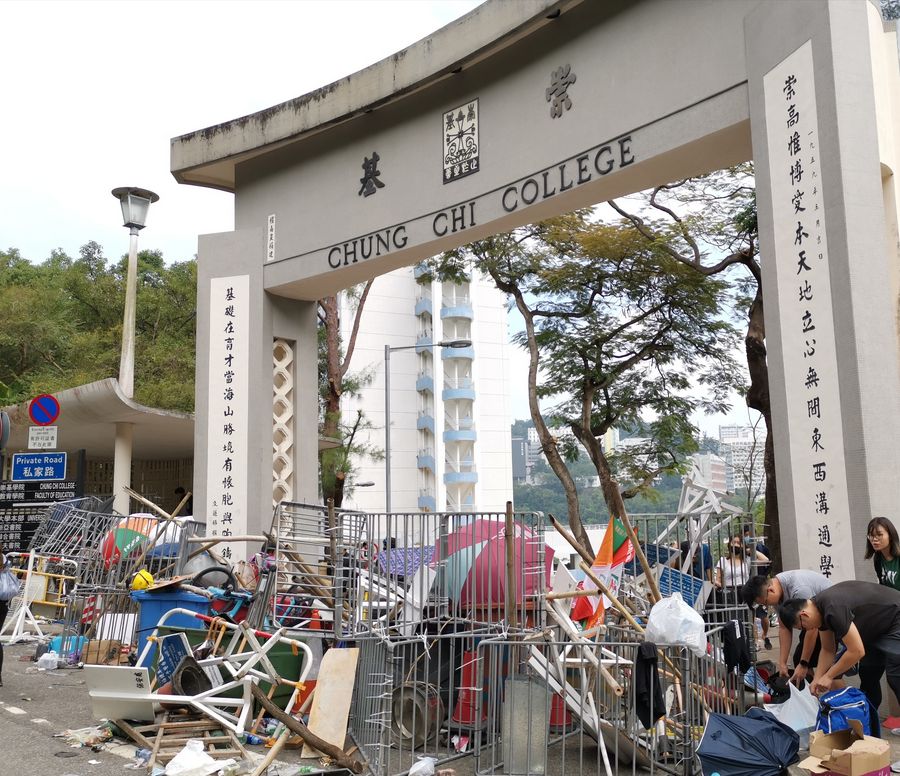 The gate of a college at the Chinese University of Hong Kong is blocked by barricade on Nov. 13, 2019. (Xinhua)

Police, while chasing after rioters, were stopped at the gate of the campus by radicals claiming that campuses are "private premises." But legal experts pointed out that schools are not considered "private premises" under the Public Order Ordinance and officers can enter and make arrests without a warrant.

Considering possible damage to the campus and in the interests of the students' safety, police retreated late Tuesday night.

The scene at the CUHK came as the latest evidence that Hong Kong universities were increasingly becoming involved in the prolonged social unrest.

The Hong Kong police said over 60 percent of 287 people arrested for violent acts since Monday turned out to be students. "We are very alarmed by the trend that more and more young students are participating in these riots," Senior Superintendent of Police Public Relations Branch Kong Wing-cheung said on Tuesday.

CUHK Engineering Professor Wong Kam-fai, who has 27 years of teaching experience, said he had a sleepless night on Tuesday and was heartbroken for what has happened to the university.

What worried him most was that the campus might be used by rioters who intended to cause violence and mayhem. "They had easily taken over the campus as their safe haven and will probably continue to do so in the future, using our poor students as their human shields." 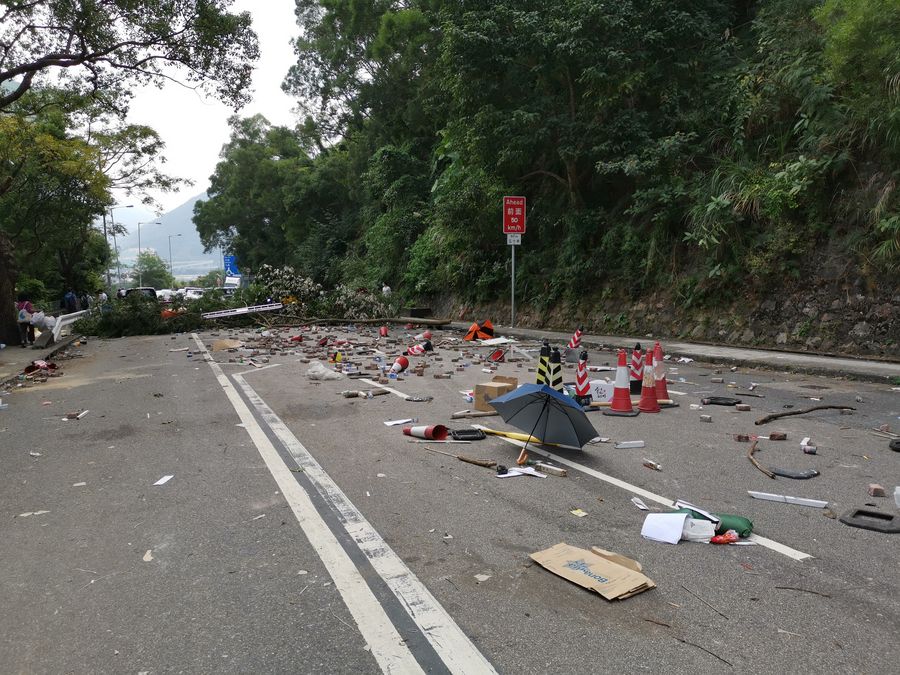 A road is blocked and vandalized by rioters outside the Chinese University of Hong Kong on Nov. 13, 2019. (Xinhua)

As facilities on the campus were seriously damaged and public transport was disrupted amid the escalating violent incidents, the CUHK decided on Wednesday to immediately end the first term of the 2019-20 academic year. All classes conducted on campus have been called off until the beginning of Term 2 on Jan. 6, 2020.

Scared by the violence and a probably even worse scenario, some mainland and international students began to flee the CUHK.

Several Thai students moved out of the school on Wednesday morning. "We will stay in hotel for a few days as whether we stay still depends on how things develop," one of them said.

The violence on the CUHK campus saddened many of its graduates. "I graduated last year," a woman who asked to be called as Jessica said. "Otherwise I dare not imagine what might have happened to me."

The Hong Kong police said on Wednesday that they have strong suspicions that the CUHK campus was being used by rioters as a "weapons factory" producing several hundred petrol bombs which have been thrown in the ruckus.

"What happened at the Chinese University of Hong Kong is a black moment for Hong Kong. A university is supposed to be a breeding ground for future leaders, but it became a battle field for criminals and rioters," Chief Superintendent of Police Public Relations Branch Tse Chun-chung told a press briefing on Wednesday.

Friendship that can be seen: Chinese medical team in Sri Lanka