Awudu’s passion was stronger than his poverty. And so, even though he had little, he gave much more. When the sun rose, forcing everyone into making daily choices, the 48-year old man says his passion and not his pocket made those decisions. It was to stand on busy streets in Accra, directing a deluge of cars as a volunteering traffic warden.

Born Abdul Rahman Haruna, the boy had a dreamy start to life. He fantasized about joining the police or a career that regaled in berets, black shiny boots, and an authoritative uniform. I really love it. The way they dress and how they walk”, he told the film crew led by Shakiru Akinyemi in a documentary done in June 2019. 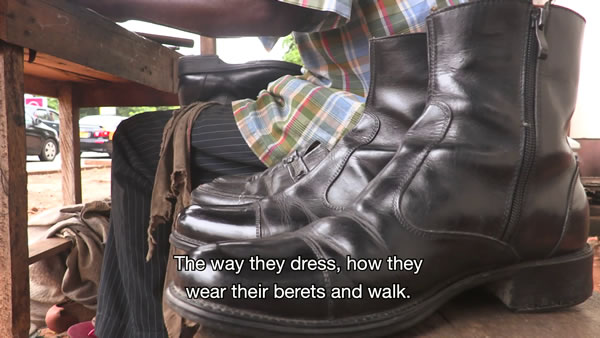 But formal education appeared not to be a family value and when his father died, it ended his apprenticeship training in tailoring. Without skill or support, Awudu braced for the full force of poverty. And oh, it came. It boxed out a row of his teeth, punched his body into a lankiness of an unlucky man who lacks. His eyes retreat

into its socket, almost disinterested in seeing no more that life had to offer his broke boss. And at night, Awudu would sleep at Awudome cemetery where he says he had countless nightmares and dreams in which he struggled with spiritual beings. There are no proud East Legon cocks to crow in the morning, only ugly

Awudome ducks to quack him out of his sleep. He sold Apples and ‘NkatieBurger’ at Abelemkpe streets until one day, the traffic lights malfunctioned at the Kaneshie to Circle stretch of the road. The Motor Traffic and Transport Unit (MTTU) dispatched a police officer to manage the traffic and Awudu would now get to see

closely the men of uniforms he had long admired. He was directing traffic while we sold our items. He started work in the morning and had a fixed closing time. The policeman and I struck a friendship He liked me…so when leaving he said ‘oh boy I am leaving”, a cue to the hawker to take over.

I stopped selling apples and Nketia burger to direct traffic only,” he said with a sense of satisfaction. Awudu would not get a beret but he made it up with a blue cap. And he would not get a uniform, a philanthropist impressed with his industry and selflessness compensated him with reflectors. He got no boot. Only

a worn-out sandal. He would glow in his cramped white shirt and held in his left hand a small round and red board with a white inscription, STOP. For the first time in his life he began to feel his place in society and in his poverty, he gave more to society from his rich reservoir of selflessness and passion. 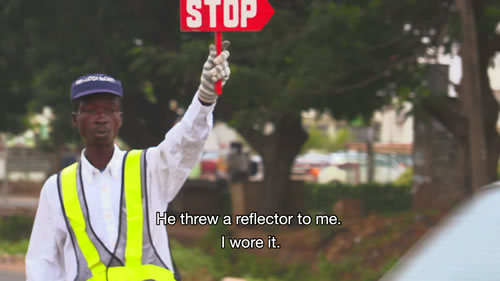 There was a feeling of rare power inside him when in lifting up his hand, a fleet of vehicles would stop on his left while he beckons another tired fleet on his right to drive off.

People began to pay attention to him.

Now they have made National Service Personnel become part of the traffic directing situation. You see what his work has done?” a journalist with the Ghanaian Times Lawrence Markwei praised him.

He is an unsung hero 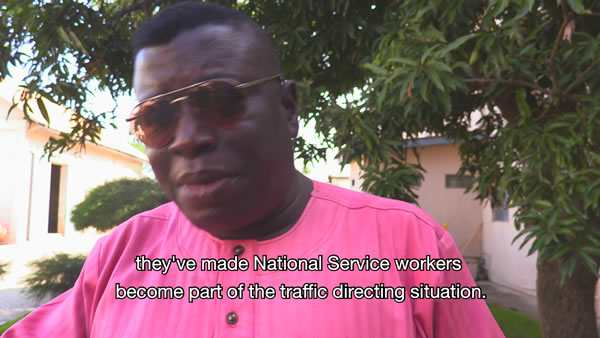 Those who are supposed to do the job are not doing it….most of the MTTU police know this guy because he has been doing the job after more than 15 years” Enoch Kelvin Ofosu, an ‘Okada’ rider testified. Awudu lives purely on benevolence. Purely. A market woman at Odawana touched by his contribution amidst his plight helps him with food when he is hungry. He gets to bath there, wash his single white shirt, clean his reflectors and his stop sign and take a nap.

“I become neat” he beamed.

But Awudu has his demons. 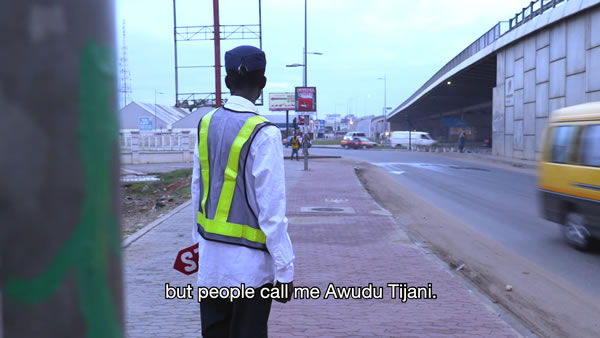 Chain-smoking stole a good part of his life. He battled this addiction for years. It hurt his friendships and alienated him. He had the look of a junky. Sometimes I feel weak and my body hurts” he pointed to withdrawal symptoms in a battle he never completely won. It is like in the blood so you become tired. When you take the

stuff you feel strong again. It wasted my money. But I have made changes he confessed. People who know him say Awudu needs help to get over his addictions. Ghanaian Times journalist Mr. Markwei sympathised with his struggles. “He needs our help” A DVD vendor Kwabena Sika Antwi in a roundabout way jumped to his

friend, Awudu’s defence. “If everybody who is on drugs does something to help the community, I think drugs should be legalised,” he said. “We all have our difficulties. But after all those challenges, that guy always does something. He stands in the hot sun every single day, God is my witness” “Sometimes when he is

tired, he would go to sit at that place under that tree to rest. The moment he gets out to rest within that twinkle of an eye, there will be traffic” the vendor highlighted Awudu’s importance. His work is not without hazards. Awudu says he was once knocked off into a gutter and woke up at the Police hospital the next morning. A

vehicle run over a bicycle he used, destroying it. A motorist mistaking him for a police officer once threatened to report him to MTTU for taking monies to direct traffic. “Which office will you report me to?” he retorted with a smile. He has moved from sleeping around the cemetery to sleeping under the Kwame

Nkrumah interchange. And he has suffered from several illnesses, sleeping in cold weather and with mosquitoes But his passion for traffic work remains unweathered. At 48 years, his health showed signs of decline but defiance remained in his voice. “More vim. I can do this work for a hundred years. I believe one day my dream

would come true. I don’t give up” “Even if I don’t earn anything today, tomorrow I will still show up at work”, he pledged undying love for a routine he began during Kufuor’s presidency. Awudu’s bold claim is unsupported by his body. He did live to get recognition. It was at the premiering of this documentary on his life at the

Silverbird Cinema on November 29, 2019. Awudu was undoubtedly the star of the night. An awed flock took several photos with him, appreciating him while his stepbrother and a friend watched on. A Korean official at the Embassy of Korea offered to let Awudu see his doctor. He personally picked up Awudu and drove him

to Ridge Hospital for examination. By this time Awudu was coughing badly. He received treatment at Adabraka Polyclinic and later at Ridge hospital. Abdul Rahman Haruna or simply Awudu died on Sunday evening of December 8, 2019, after a battle with bronchial cancer. 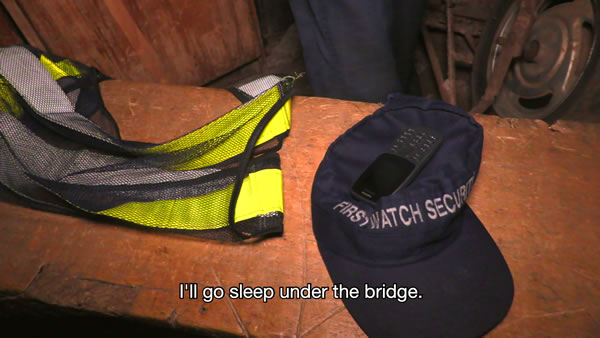 Awudu’s passion was stronger than his poverty. But it was almost stronger than his addictions. And after a long arm-wrestling between the two, Awudu caved in. He was buried Wednesday, December 11, 2019, according to Islamic tradition. And it was at a place where he had long made his home, where he battled strange figures in his dreams and nightmares - the Awudome Cemetry.

NDC Passed Bills To Streamline Activities Of Banks, Others...