Since fleeing her hometown in northeastern Syria, Suad Simon prays every day for the safety of her husband, who stayed behind with other fighters to defend their majority-Assyrian village.

Assyrian Christians like Simon, who escaped the town’s occupation by the Islamic State group in 2015 and did not choose to emigrate, now anxiously watch the advance of Turkish forces towards their villages in the south of Hasakeh province.

Ankara is still trying to gain ground despite two ceasefire agreements reached last month to put an end to its offensive against the Kurdish-dominated region.

Simon, 56, fled her village of Tal Kefji that is not far from areas still hit by sporadic fighting and sought refuge with a relative in Tal Tamr to the south.

“We women left because we were afraid of the bombings,” said Simon, sitting in the corner of an earthen house where she had lit candles for her husband.“We just want peace,” she said. “I left behind so many memories… my husband, my house, my family and neighbors.” 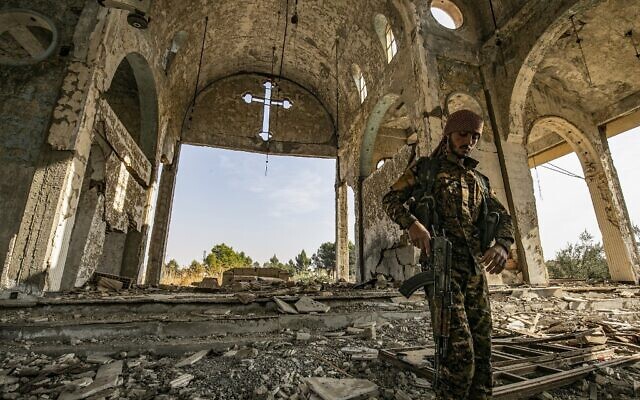 Her husband had joined the Khabur Guards, a small Christian militia that took up the defense of more than thirty Assyrian villages in 2015 with the help of the Kurdish-led Syrian Democratic Forces.

Ankara launched a cross-border invasion of the Kurdish-controlled region on October 9 to push back the Kurdish People’s Protection Units (YPG), the backbone of the SDF, which it deems a “terrorist” group.

The operation has seen the Turkish army occupy a strip spanning some 120 kilometers (75 miles) of the border.

Around 150 civilians have been killed in the fighting and a further 300,000 displaced, according to the Syrian Observatory for Human Rights.

Despite two ceasefires, Turkish forces and their Syrian proxies have taken control of dozens of towns, including some Assyrian-majority villages, the Britain-based monitor said.

“There are Turkish threats to attack our villages and many are fleeing,” 48-year-old Assyrian Aisho Nissan told AFP in Tal Tamr.

“The fate of the region remains uncertain, we are afraid for our children and our families.”

In Tal Tamr, cars and buses loaded with people and their belongings can be seen heading south, most towards the city of Hasakeh, where hundreds of families fleeing the violence have taken shelter.

At the headquarters of the Assyrian militia, spokesman Nabil Warde said the Turks are “our long-time enemies,” referencing the 1915-1918 massacres of Armenians and Assyrian-Chaldeans under the Ottoman Empire. 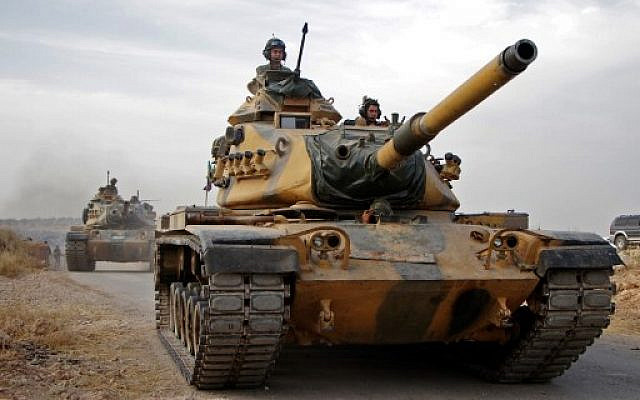 Turkish soldiers with US-made M60 tanks drive through the town of Tukhar, north of Syria’s northern city of Manbij, on October 14, 2019, as Turkey and its allies continue their assault on Kurdish-held border towns in northeastern Syria. (Aref Tammawi/AFP)

“It’s the second time we have faced an offensive, the first by Daesh and this time by the Turks,” he said, using another name for IS.

The fertile region of Khabur was taken in February 2015 by IS, who kidnapped at least 220 Christian Assyrians before later releasing them in exchange for ransom.IS was pushed from its last stronghold in the area by Kurdish-led forces early this year.

Approximately 20,000 people lived in the 35 Assyrian villages in Khabur before the IS invasion, but only about 1,000 now remain, said Warde.Of those who left, many have emigrated to the United States, Australia and Canada.

Before the start of the war in Syria in 2011, Assyrians made up around 30,000 of the 1.2 million Christians in Syria.In his village of Tal Nasri, 50-year-old Sarkoun Selio, who is one of the few Assyrians still living there, stood in a church destroyed by IS in 2015, accompanied by two militiamen. 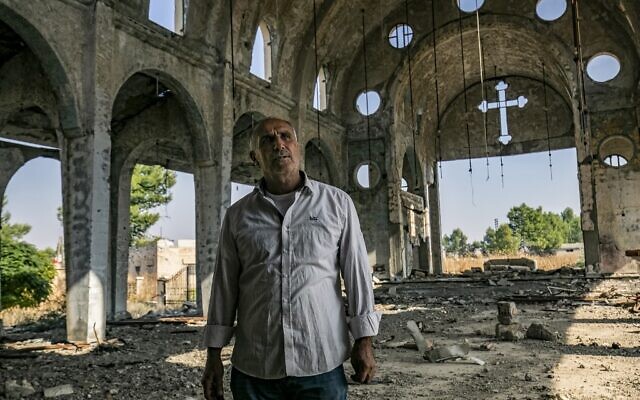 Sarkoun Selio, a 50-year-old Assyrian Christian Syrian and one of the few Assyrians still living there, walks in the ruins of the Assyrian Church of the Virgin Mary, which was previously destroyed by Islamic State (IS) group fighters, in the village of Tal Nasri south of the town of Tal Tamr in Syria’s northeastern Hasakah province on November 15, 2019. (Delil souleiman / AFP)

Only the stone skeleton of the building still stands, while its large iron cross lies in a corner of the courtyard.One of the militiamen picked up a torn page of gospel written in Assyrian.

“In 2015, we were attacked by the terrorists of Daesh,” said Nasri, voicing worry over what more violence will mean for the community.“We fear that the last of our Assyrian people will be pushed into exile.”