The Queenmother of Adusah Ototsem in in the Ga West Municipality in the Greater Accra Region, Nana Yaa Yaa Kortieley, has threatened to lead residents in the area to demonstrate against the payment of road tolls and the property rates if their roads are not not fixed as soon as possible. She said she did not understand what the tolls

collected regularly were used for, and thus did not see any reason why they should continue to pay. I will also ensure that I gather all the people in the area also to continuously demonstrate and stop paying tolls and property rates because they do not use the money for anything meaningful. They have taken us for a ride for a

long time,” she told The Mirror in an interview during a visit to the area. Nana Kortieley did not hide her anger about the numerous unfulfilled promises to fix the roads made by the Municipal Chief Executive of the Ga West Municipal Assembly, Mr Clement Wilkinson.

Residents of Adusah, Afuaman, Oshuman, Mayera, Faase, Kwashiekuma, Ablekuma Manhean, Nsakina and Oduman, and surrounding communities have had to bear the brunt of poor road networks for years. Despite the many demonstrations to call the attention of the authorities to fix what they describe as their “killer” roads, their cries had fallen on deaf ears. Recently, some of the residents threatened not to vote in the upcoming District Assembly and Unit Committee elections and the 2020 general elections if their roads were not fixed. 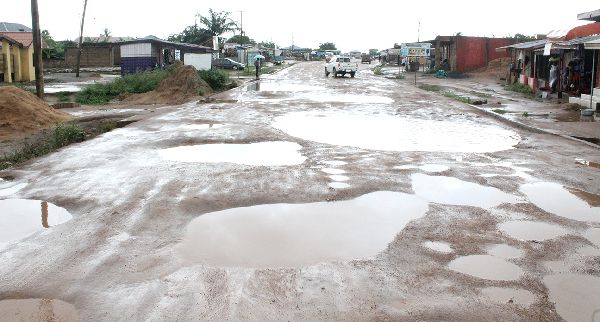 The about eight-kilometre road stretch from Ablekuma curve through Abease, Afuaman, Manhean, Nsakina, Oduman, and Borkoborko has been abandoned by the contractors for the lack of funds and during a tour of the municipality by The Mirror, it was observed that the road that went through Mayera, Adusah, Abensu and

Faase was also in a deplorable state bumpy, dusty and full of gullies. Anytime it rained, the situation got worse as portions of the roads got flooded, making the road unmotorable.Worse of all, the frontage of a clinic located at Oduman, which was inaugurated for use this year always gets flooded whenever it rains.

According to the queenmother, the poor roads in the area had increased robbery cases, “and the assembly seems not to care. Therefore, we have also formed a watchdog group to be protecting us. On my own, I have constructed schools and working on other projects that will better the lives of the residents here but the assembly is also taking a lot of money from us and not doing anything with it, she stated.

‘Roads to be fixed soon’

Responding to the issues, Mr Wilkinson stated that all the roads mentioned had been awarded on contract, and work would begin in earnest this month. But I don’t think it is right for the residents to say they won’t pay tolls and taxes, because if you don’t, how do we get money to fix the roads and also embark on the other

development projects, he asked? In spite of this, I want to assure the residents that work will begin on all the roads this month. I am happy that they are challenging me to work, and I will also prove them wrong, he also explained.The MCE also challenged them to sing his praises and do a thank you demonstration after the

roads had been fixed. Meanwhile, this is not the first time Mr Wilkinson had failed on his promises and timelines.In August this year, he made similar promises to fix the Pokuase-Mayera road, but nothing had been done to date.

The Ga West Municipality is one of the 254 Metropolitan, Municipal and District Assemblies (MMDAs) in Ghana and forms part of the 26 MMDAs in the Greater Accra Region. It was carved out of the erstwhile Ga Municipality which was created in 1988 in pursuance of the government’s decentralisation and the

local government reform policy. In the 2004, the Ga Municipality was divided into two, with Amasaman remaining the capital for the newly created Ga West Municipal. The municipality lies within latitude 5°35° North, 5°29’ North and longitude 0°10’ West and 0°24’ West. It shares common boundaries with Ga East

Municipality and Accra Metropolis to the east, Akwapim South District to the north and Ga South Municipality and Ga Central Municipality to the south. It occupies a land area of approximately 284.08 sq. km with about 412 communities. The population of the municipality, according to the 2010 Population and Housing Census, stands at 219,788 with 107,742 males and 112,046 females.

Government Must Come Clean On Acquisition Of AirtelTigo...