The case against Abiri sets a dangerous precedent, threatening freedom of the press in Nigeria.

A familiar secrecy is set to dominate the renewed prosecution of Nigerian journalist Jones Abiri.On December 12, Abiri is scheduled to appear again in federal court where he is charged with terrorism, sabotage and cybercrimes. The prosecution says they have new evidence against him but have asked the judge for permission to keep their witnesses anonymous.

In over three years of prosecution, this is only the most recent effort to deny transparency on a case symbolic of broader concerns about press freedom and accountability in Nigeria.Abiri's trial continues amid a wider crackdown on freedom of the press and free expression in Nigeria. In recent months, several Nigerian journalists have been jailed for their work, while others have been attacked, even killed, covering protests.

Omoyele Sowore, a US resident and founder of the Sahara Reporters online newspaper, was arrested on August 3 after calling for nationwide protests and remains in detention. In June, Nigeria's Department of State Security (DSS) also arrested multiple social media users without disclosing their names. Peter Afunanya, the DSS spokesperson, has not responded to repeated calls and messages for clarity about their identities and whereabouts.

Abiri was the editor and publisher of his newspaper, The Weekly Source in Nigeria's southern Yenagoa city, when he was arrested for the first time in July 2016. The DSS detained him on terrorism allegations and held him in secret for more than two years without access to his family or a lawyer. DSS provided no information about him, and speculation swirled that he was dead.

Finally, in August 2018, after local journalists and rights groups repeatedly raised his case with officials, Abiri was brought to a magistrate's court in Abuja, Nigeria's capital, and charged with allegedly demanding payments from oil companies. The government maintained he was a militant, but no evidence was ever presented and the case was thrown out over a jurisdictional issue. A separate court at the time ordered the Nigerian government to compensate Abiri 10.5 million naira ($29,000) for violation of his constitutional rights. They have yet to pay.

In September 2018, Abiri returned home to Nigeria's southern Bayelsa state and reopened his newspaper. But he would not be free for long.

In March this year, he was summoned by the DSS for questioning and two months later arrested again; he was then charged with the same alleged crimes that were dismissed by the court in 2018. In late October, Abiri was released on bail.

The ongoing trial, however, could be the first time Abiri and the Nigerian public see courtroom evidence attempting to justify the journalist's years behind bars. That is, unless it is kept secret.

In June, the prosecution asked for their witnesses to be granted "protection", which would mean they are permitted to remain anonymous. Samuel Ogala, Abiri's lawyer, told me that if the judge grants the request, neither he nor Abiri would be permitted to know who the witnesses are. They would be forced to trust the words of the accusers without any ability to assess the credibility of those that speak them.

The prospect of a trial shrouded in secrecy was made more real by a separate Nigerian federal court decision in October, which granted anonymity to individuals expected to testify against jailed journalist Agba Jalingo. The public has also been barred from the courtroom when the witnesses are called.

Jalingo's lawyer said the prosecution claimed their witnesses feared being attacked. The lead prosecutor in Abiri's case, Aminu Kayode Alilu, declined to comment on why witness protection would be necessary.

During and after Nigeria's February 2019 presidential and state elections, I interviewed journalists in Abuja and Lagos on their feelings about the future of press freedom in their country. Abiri and his traumatic experience at the hands of security services featured in almost every answer. How he was and is being treated looms in the consciousness of the Nigerian press. If Abiri could be kept for years without trial, who else could disappear into a detention facility?

Abiri's case represents something bigger than his individual fight for freedom and justice. To keep secret the identities of the witnesses set to testify against him is to deny Nigerian journalists and the public a full and honest explanation for why one of their peers suffered so greatly. Without transparency, Abiri's prosecution will remain a chilling spectre. 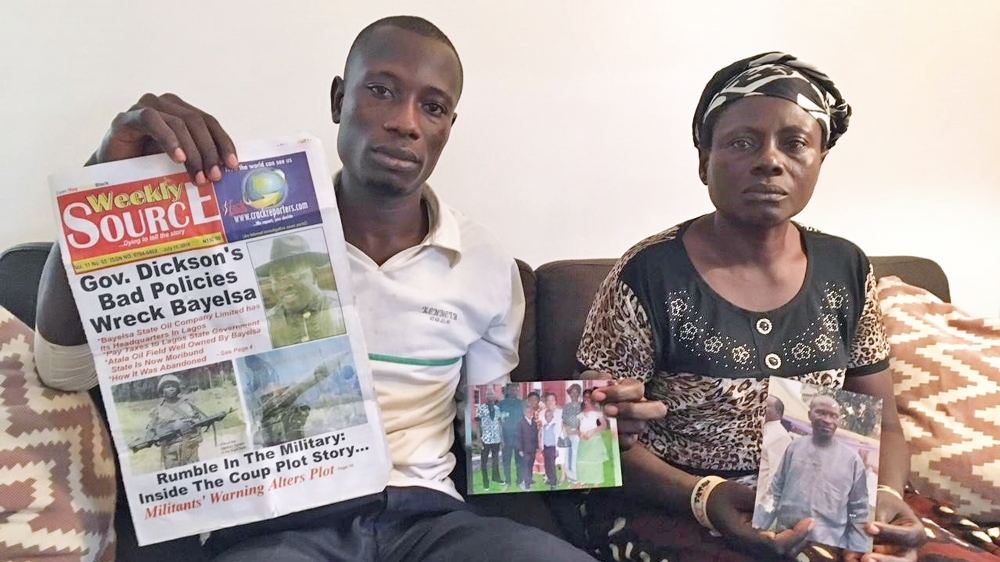 Abiri Angatimi Kenneth and Toboulayefa Jones hold photographs of their imprisoned father and husband, Jones Abiri, along with the last edition of his newspaper, published before he was imprisoned in 2016 for two years without trial. Abiri was released in August 2018, but rearrested in May 2019, charged in federal court, and released on bail in October.