The President Nana Addo Dankwa Akufo-Addo and his wife, First Lady Rebecca Akufo-Addo this morning voted in the ongoing District Assembly and Unit Committee Elections, in fulfillment of their civic duties at the Rock of Ages polling station 'B', in Kyebi in the Eastern region.

Nana Akufo-Addo urged all Ghanaians to participate in these elections, and, thereby, help deepen democracy at the local government level.
Earlier in the day, the Vice President Dr Mahamudu Bawumia voted at the Kperiga Presby D/A School 'A' polling station in Walewale.
Voting began at 7 a.m. and ends at 5 p.m. 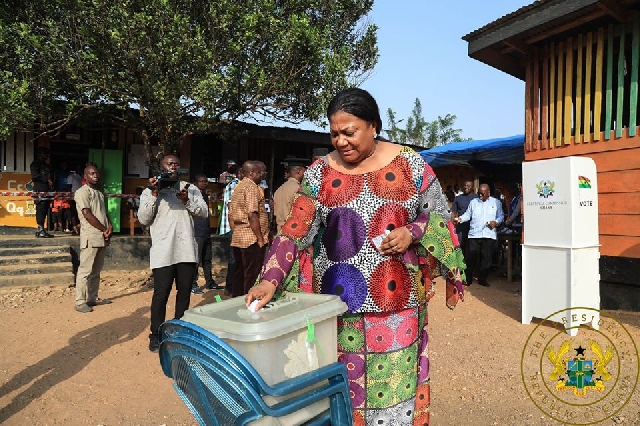 Ghana Immigration Service, Ghana National Fire Service and the Customs Division of the Ghana Revenue Authority to support the Electoral Commission in providing security at polling nations and collation centers throughout the country for the local level elections scheduled for December 17, 2019,” the police said in a statement.

“Also, personnel of the Ghana Armed Forces are on standby at strategic locations to provide support to the other sister security services when the need arises.  The (NESTF) assures the general public, especially the voting population and candidates, that the Police and sister security services will ensure the smooth conduct of the District Assembly and Unit Committee elections without let or hindrance," the statement added.

The Coalition of Domestic Election Observers (CODEO) has also indicated its readiness to observe the district assembly elections and has called on voters to “obey the electoral laws of the country to support free, fair and credible election.”

We Will Investigate Jean Mensa Led EC if We Win Power -...